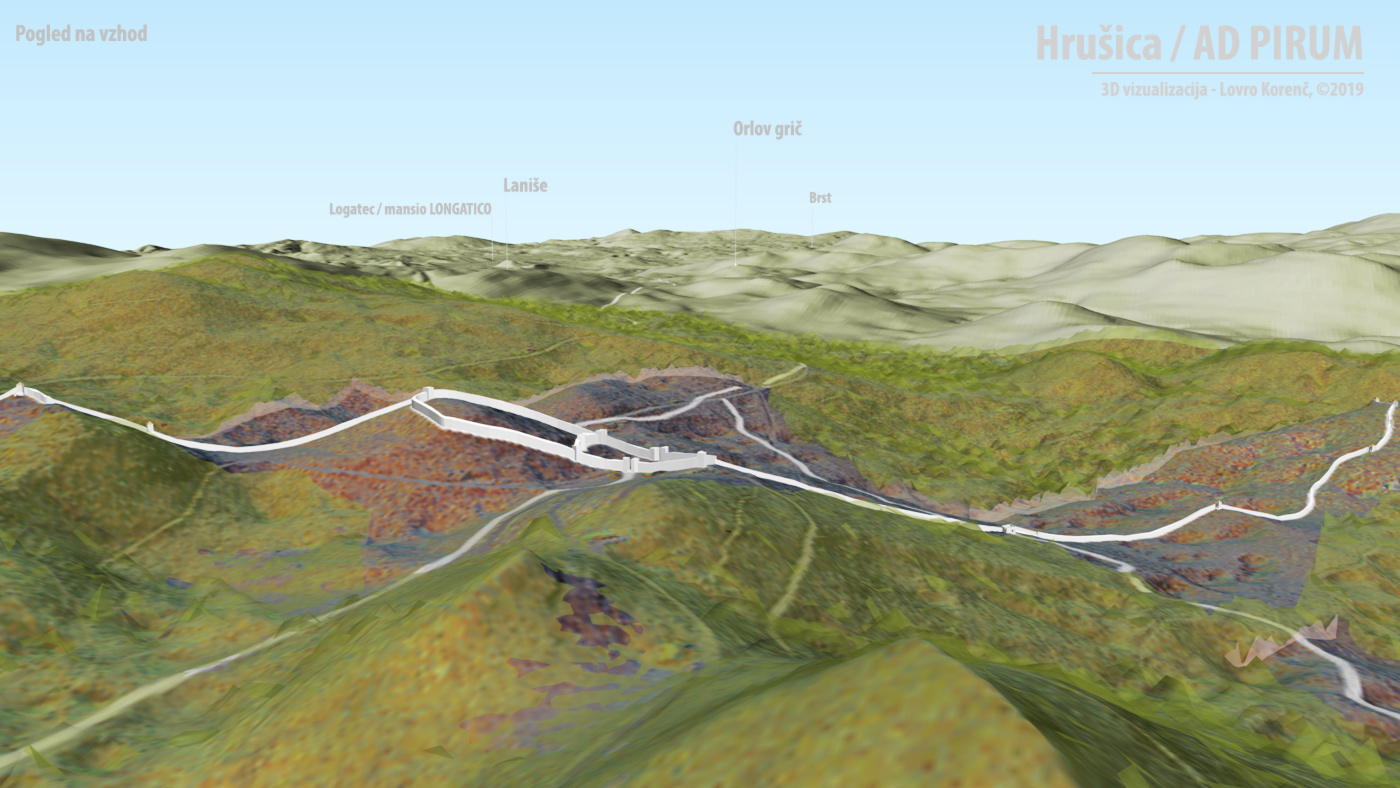 When we study the past, we often wonder what the world looked like in that time. Visual communication is useful for the historical sciences, especially for presenting data and theses with spatial features. Authors decide on the presentation technique based on the proposed use and availability of media to reach the intended audience. When we entered the digital age, we first tried to transfer all previous knowledge and some techniques into this new technology. Today, where most of the work processes and other activities take place in a virtual environment, we also have many new presentation techniques that allow us to present and explore the historical landscape.

The aim of this article is to describe a method (workflow) for rapid 3D visualization and interactive presentation of reconstructed archeological remains 1 on a diverse terrain with open source software. This can contribute to a better understanding of these remains 2 and enrich a list of media for the presentation of objects in a landscape. The interactive 3D model was created in the QGIS software using the qgis2threejs plugin . The result is an html web page that runs on only two JavaScript libraries. The plugin has a mobile-friendly export option that can provide the current position of the user as well as a Augmented reality (AR) experience.

The digital preservation and presentation of cultural heritage for objects and areas that are still in function or that we can still measure and scan already has well established protocols and processes 3-5, mainly aimed at the documentation and preservation of cultural heritage. We can use similar tools to visualize objects that no longer exist and whose remains are well hidden in nature. These objects can be reconstructed using data from archeological excavation and historical sources. The result is a restored historical landscape that is useful not only for research but also for education.

The remains of a late-roman fortification AD PIRVM on the Hrušica mountain pass 6 were selected for the case study. The article first presents a method for rapid 3D visualization of simple architectural elements (such as a wall and a tower) on a diverse terrain. The second part describes a process for adding CAD-made models to the GIS environment. Finally some information about the spatial data sets used for reconstruction.

Rapid modelling of 3D objects on a terrain

Two basic data sets are used to create an interactive 3D model: Digital Elevation Model (DEM) of the terrain and the vector data of the archeological or architectural geometries. From DEM, additional raster image visualizations were created (hillshade, slope, aspect), which were used to improve the visual perception of the terrain. The process for creating the interactive 3D model is as follows: We load DEM, terrain visualizations (for texture) and the outlines of the architecture (vector files of wall outlines [line, polygon] and towers [polygon]) into the QGIS software. Once we edit the data and define its graphical properties (/symbology), we can create a simple 3D model of the architectural outlines on the terrain. We open the qgis2threejs plugin, define the source DEM and vector layers.

The presented images have the following vector properties: 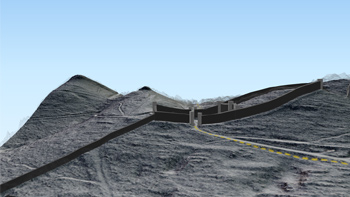 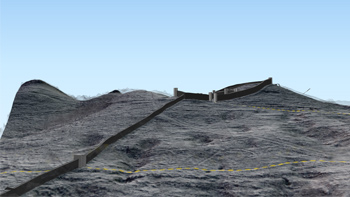 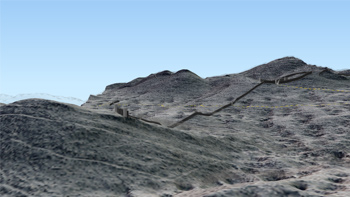 Besides the clear advantages of this method (like speed and scale) when creating 3D objects, one can also see the disadvantages if the objects are more complex than simple geometries generated. Let us take the towers of eastern entrance to the fort for example. They were certainly built to the same height, today, the terrain on which they stood is not even, which leads to a difference in height of the generated objects. All these details cannot be fixed automatically, we can hack around them, but this will not be part of the article. So far, the method is suitable for fast visualization of elements on a large scale, when not many details are needed. For a more realistic creation of 3D models the plugin offers some other options.

Qgis2threejs has an option of importing 3D objects (COLLADA format) into the model. First a point vector layer must be loaded into QGIS, a point is defined that will serve as spatial reference or an anchor. In the plugin [point] layer settings [Object type = Model file] option is selected. The importing of CAD-made 3D models and its architectural visualizations onto detailed GIS-made terrain surface models, vastly improves the visual quality of the end product. 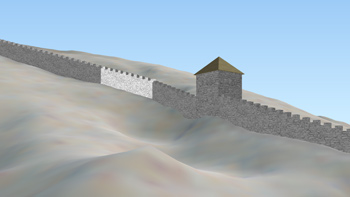 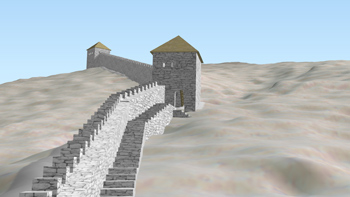 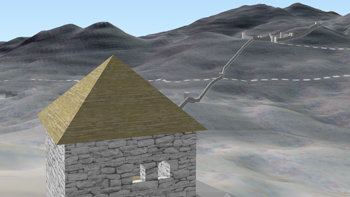 Area for the case study encompasses the remains of a late-roman fortifications named AD PIRVM on Hrušica mountain pass, this remains cover a very diverse terrain. For visualization of terrain surface and elevation data, a point-cloud LIDAR data was used, it was sourced from ARSO , Slovenian environmental agency. Digital elevation model was calculated using point-cloud gridding method, where the cell size in the resulting raster image was defined to 0,25m. Plugin then re-samples the 3D surface, built from the DEM, so the final resolution is smaller than 0,25m.

CAD-made 3D models, reconstructions of roman fortification architecture, were realized for segments of the fort, whose reconstruction attempts were not published until now 7. They are based on scientific literature review (archeological, historical) 8-14, in-situ inspections, measurements, by considering local landscape characteristics, available materials and roman building techniques. First 3D models were produced in 2015 (©) as a collection of basic elements, for different types of fortifications, that can be later joined to form a larger structure. The defensive walls north and south of the fort have 3D models of towers imported, 2 gate towers and the southern-most wall segment were drawn based on archeological excavation ground plan, the rest of the towers are a basic tower element from my collection (square, 4x4m). An attempt at reconstruction of defensive walls is shown in two parts, south of the eastern gate tower a stepped stone walkway was designed and it is authors suggested solution. The southern-most part of the walls have wooden walkways on masonry foundation, some of which were discovered during archeological excavation and are a common characteristic of walls in Claustra Alpium Iuliarum (CAI) defensive system.

Vector data of geo-located geometries for the fort, defensive walls and towers, was sourced from CAI layer, part of Atlas of Antiquity (assembled and edited by Jaka Pelan, authorized use: ©Arkeomapia, 2016). This collection is part of my spatial database of archeological areas from prehistory and antiquity. Minor revisions of the CAI layer geometries were done (for example Brst fort). 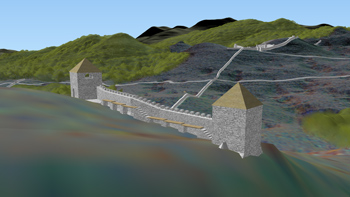 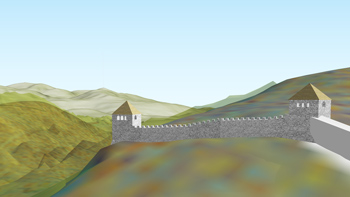 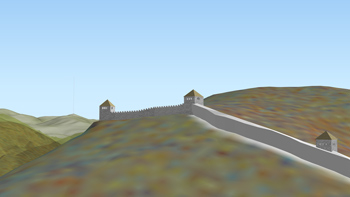 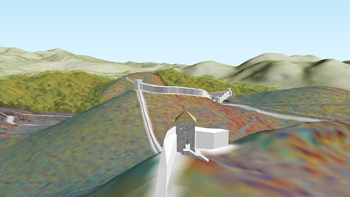 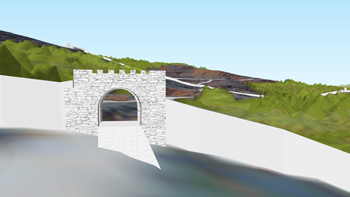 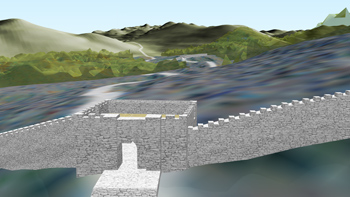 This subject, a reconstruction of archeological remains in historic landscape, is in the field of historical sciences, but they are not the only ones that can benefit from presented method. It can be used in spatial planning, architecture, urbanism, landscape design or civil engineering as an additional tool for presentation of projects and designs. 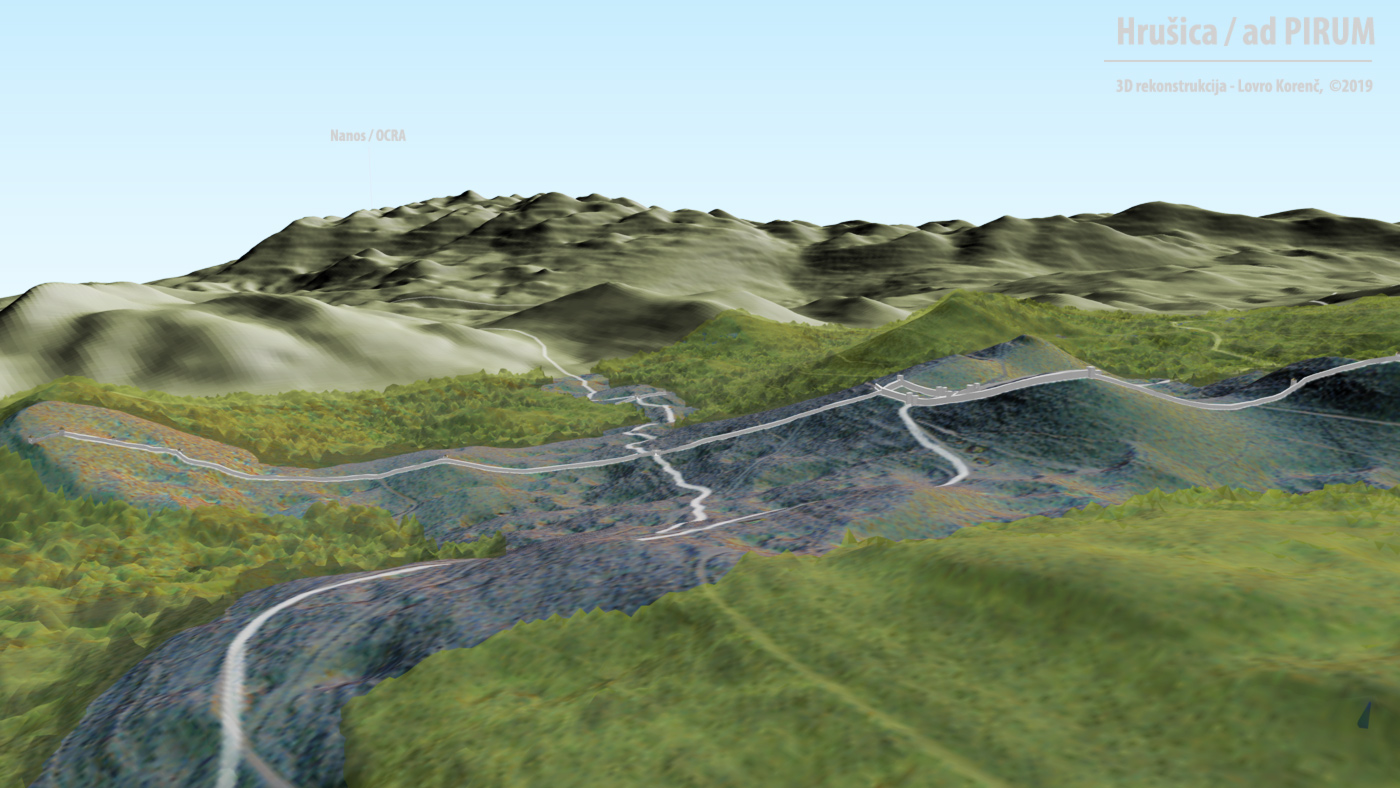